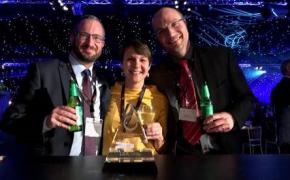 Yesterday at the Jefferies 2018 London Healthcare Conference, Aelin Therapeutics has been awarded the Life Stars award for EU Private Finance Raise of the year.

The Jefferies conference is the largest conference focused on healthcare in Europe, celebrating its ninth edition in 2018.  This year’s conference took place in London. Last year, the conference hosted more than 400 companies, 1800 attendees and 4,500 business-to-business and investor meetings.

At the 2018 event, Aelin Therapeutics was awarded the prestigious LifeStarts Award in the category “EU Private Finance Raise of the Year”. The jury particularly praised the promising new technology and the great potential impact within a large disease domain.

Fighting antibiotic-resistant or untreatable diseases in an innovative way: that is the mission of Aelin Therapeutics. The company will develop so-called Pept-insTM, a new type of medication that neutralizes ‘bad’ proteins by making them stick together. Founder Prof. Joost Schymkowitz and Prof. Frederic Rousseau (both VIB-KU Leuven) have already proven the success of these designer molecules in bacteria, cancer cells, fungi, viruses and plant cells. Their pioneering studies have been published in leading journals such as Science. The innovative concept, combined with solid science, formed the basis for bringing together an internationally renowned investor consortium in this new spin-off with an initial capital of € 27 million. The international consortium of investors consists of PMV and Fund+ (Belgium), LSP (the Netherlands) and two major corporate funds: the German Boehringer Ingelheim Venture Fund and the Swiss Novartis Venture Fund.

What makes Pept-insTM stand out is that they can be designed flexibly for different conditions and can also find their ‘target proteins’ in hard-to-reach places. As a result, diseases that traditionally seemed untreatable could be cured.

Aelin Therapeutics will pursue this ambition in two domains. The company will develop antibacterial drugs as an alternative to the traditional antibiotics against which many diseases have become resistant. The start-up also focuses on anti-cancer therapies. The goal is to test the first Pept-inTM-based drugs on patients in the foreseeable future.